Here are 3 simple ways to start up a spiritual conversation

3 simple ways to start up a spiritual conversation. 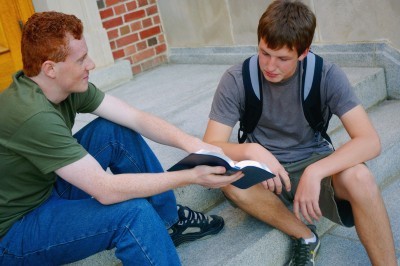 Asking a question like, “Did you hear about the flooding yesterday” might be a conversation starter at any time and with anyone, believer or not. It doesn’t matter whether they’ve heard about it or not (whatever it was) because natural catastrophes, accidents, and terrorist acts affect us all in one way or another. You don’t necessarily have to start talking about spiritual things, because tragedies like these because most people have heard about them, so a good ice breaker could be as simple as asking, “Did you hear about the earthquake yesterday in…” or whatever else may have happened today or recently. A very sobering question is, “Do you ever think about what happens after death?” When tragedy strikes, like natural disasters, it makes people think about their mortality, and that all of us are one only heartbeat or accident or stroke away from eternity. That’s when the judgment of God comes (Heb 9:27; Rev 20:12-15). That’s why it’s so crucial to trust in Christ today. No one is guaranteed tomorrow. That’s why it’s a topic that almost everyone thinks about. Life and death are always attention grabbers, so when there are things that happen where people suffer great loss, or even lose their lives, it’s always something that people can relate to. It doesn’t matter whether a person is saved or not. We all have one thing in common…we’re all going to die someday. The old Chinese proverb is right; after the game is over, the pawn and the king go in the same box. Death is the great equalizer and the statistics prove it; 10 out of every 10 people will die. Being human is 100% fatal…eventually.

What About Your Family?

We all have family. There is no one born who hasn’t had a mother, and so a natural conversation starter is asking someone about their family. You could also ask them where they’re from, how many children they have, or where do they work. These are things that most people are more than willing to talk about. Ask anyone about their children and grandchildren, and they cannot help but talk about them, and I know. As a father and grandfather, I would respond in the very same manner, being eager to share about my children and grandchildren, so whether a person’s trusted in Christ or not, there is common ground upon which we all stand, and that is family. It’s something that most people have great feelings for, even though many times their family has brought them great pain and suffering, they have also brought them much joy. Family is what is closest to our hearts other than God, so when you ask someone about their family, you can almost always expect an answer. Family can mean the most to us, however, those we love the most, can also hurt us the most. They can bring us the greatest of joy, but they can also bring us the greatest of sorrow.

Where do you Attend Church?

At one time, I was a reluctant witness of Christ…and to an extent, I still am. I would be waiting at a bus stop with some people and never utter a word, until one day I saw a church sign on a bus that went by the other direction. It made me think, so I ask the young couple waiting for the bus, “Do you folks know where there’s a good church at around here?” The man said, “We don’t go to church. We used to, but when we moved and we just stopped going.” Now, I had opened up the conversation, and actually prayed the bus would be late so I could witness to them about Christ. Then I told them, “I’m know church doesn’t save you, but only Christ saves,” and the wife shook her head. The husband just looked at the ground. Believe me when I say, that must have been the Holy Spirit because before I said anything, my heart was pounding, I was sweating, and my voice was probably a bit shaky and my mouth was dry, but God can use even the worst witnessing as a means to save some. That’s when the bus came and they got on and I went back across the street. I wonder what they thought when they realized that I wasn’t there waiting for the bus; I was there to witness for Christ. I imagine they finally figured that out, and, I have often wondered what happened to that couple. Will I see them in the kingdom? Of course, attending church doesn’t save you because Jesus said there would be tares among the wheat, but it’s a great way to find out if someone’s a believer or not. Just ask them where they go to church or if they know where a good church home is at. It’s might open the door to a conversation, and even if it doesn’t, you have been obedient as witnesses for Christ in doing the Great Commission (Matt 28:18-20; Acts 1:8). Besides, we’re not responsible for their being saved or lost because it is God alone Who saves (John 6:44; Acts4:12; Eph 1). And the good thing is, the Spirit will help us know what to say. Believe me, I have no clue where some of the things that come out of my mouth come from, other than the Holy Spirit of God.

We never really know if someone is a Christ follower or not, but one good way to find out is to start a conversation with them. Ask them about their family, about their job, about their church, about recent tragedies, or whatever else you can think of. When I’m about to witness to people, I have no idea what I’m going to say. I don’t keep a flash card and memorize what to say. Each person has unique needs and is moved by different things, so I trust the Spirit of God to put words in my mouth that may bring some to Christ. It is easier if you’re waiting in line or at the doctor or dentist office. You’d be surprised who is eavesdropping. Maybe your conversation starter might get their attention. It’s happened before where someone is witnessing to one person and the other person is saved. If you don’t know what to say, trust the Spirit. He will work through you and in you, even if you (or I) have no clue what we’re going to say.

May God richly bless you

My wife Martha and myself pastor a lovely church in Udall, KS (Heritage) who are on-mission and going into the local communities, nursing homes, prisons, state hospitals, and to shut-ins. Join us in worship where we're not just church members; we're family. View all posts by Pastor Jack Wellman